Born in Mumbai (formerly Bombay), India. I studied at Campion High School, then Jai Hind College, followed by The Institute of Science (Mumbai). I got my B.Sc. from University of Mumbai in 1979 and my Ph.D. from Carnegie-Mellon University (Pittsburgh) in 1983 (both in Mathematics).

The Death of Vishnu was the winner of the 2002 Barnes and Noble Discover Prize, the 2001 Ralph Heyne Corrine Buchpreis (Germany), the 2002 McKittrick Prize (U.K.), and a Pen-Bingham Fellowship for 2002-04. It was also a finalist for the Pen-Faulkner award, Kiriyama prize, Pen-Hemingway award, L.A. Times Art Seidenbaum award, Torgi Literary award (Canada) and W.H. Smith First Novel award (UK). It was long-listed for the Booker Prize (2001) and the IMPAC Prize (2003) and was a New York Times Notable Book for 2001.

The Age of Shiva was listed as one of the best 25 books of the decade by Contemporary Literature.

The City of Devi was listed as #12 in Flavorwire’s “50 Essential Works on LGBT Fiction,” won the 2014 Bisexual Book Prize and was a finalist for the Lambda Literary Fiction Award.

One of my hobbies in India was painting film posters. Although many of them were ‘Bollywood’ movies, here are some Hollywood ones:

The UK cover of “The Death of Vishnu” mimics a Hindi film poster, and is inspired in part by the idea of a film poster cover I painted for the book. 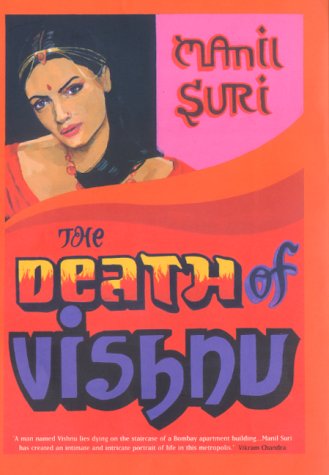 I spend a lot of my free time doing this. Here’s a picture of some appetizers prepared for a dinner some years back. People who’ve read “The Death of Vishnu” ask me if there is really such a thing as ‘Russian salad samosas.’ Well, no—not that I have tasted (thankfully), but given the craze for ‘fusion’ cooking, I can imagine it appearing on some menu soon. What I personally enjoy doing is adding one or two ingredients from one cuisine into a recipe from another cuisine (such as a French cream soup made with coconut milk instead of cream). I hesitate to put recipes here because (like most home experimenters) I don’t write down precise amounts of ingredients used. My recipe of Salmon with Orange and Mint (picture below) combines coriander seed and mint from India with salmon and cream from France (and has successfully endured many dinner parties). The two foods I miss most from India? First and foremost, the Alphonso mango, which is the king of the king of fruits. People in the US who are used to the tough, stringy, raw and tasteless blobs that one finds in supermarkets have no idea to what poetic heights this fruit can transport one to. Go to Mumbai in April to taste an Alphonso, or if that’s too far, go to Southall, the Indian section of London, where they are available in the summer. The second is the glorious pomfret, a pompano-like fish with a very distinctive and prized flavor.